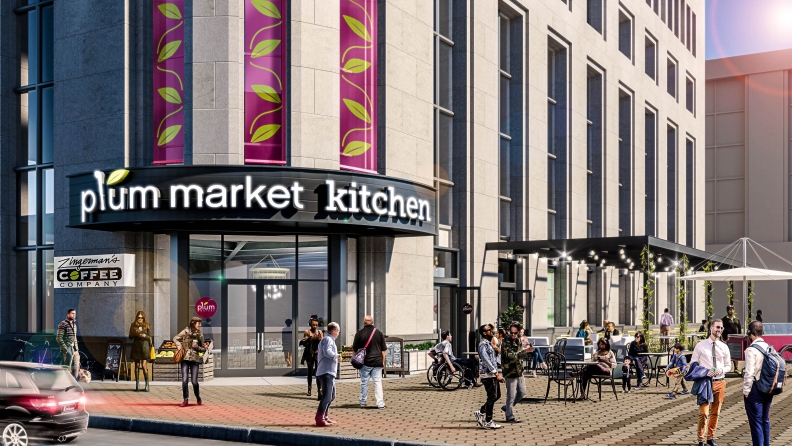 On its current trajectory, Plum Market would open two Detroit stores by mid-2019.

The Farmington Hills-based specialty grocer and food service company announced plans a year ago to open a cafe and market this spring in the Henry Ford Detroit Pistons Performance Center in the New Center area. And earlier this month it said it signed on to open in the Ally Detroit Center skyscraper downtown in the summer.

“An emphasis on prepared foods is a big thing for all of them … (What) kind of spurred these small formats, for us, is we see a niche in the market. Our prepared foods departments are popular in our large format stores,” Jonna said. “We see a need for what we do on the prepared foods side in locations like the Ally center in Detroit.”

The 8,000-square-foot “street concept” store, set to open in the Ally building at 500 Woodward Ave., would have a cafeteria with hot meals, salads, sandwiches, soups and sushi. It’ll also have a full-service bar with wine, beer and liquor; a coffee bar; fresh-cut flowers; and Zingerman’s baked goods. 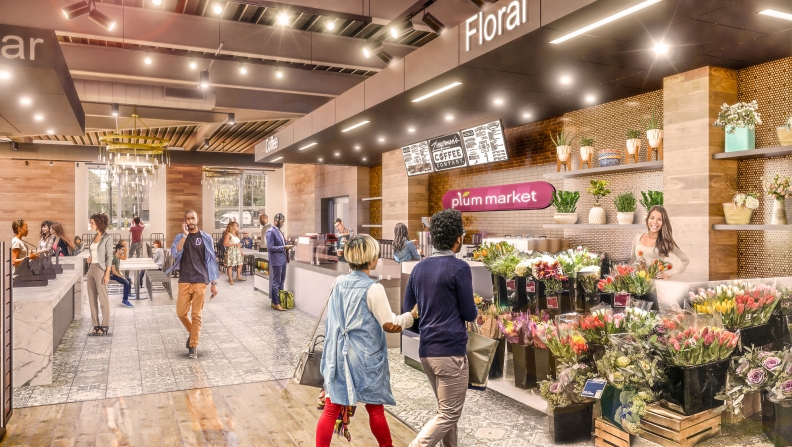 Saroki Architecture is the architect and Jonna Construction is the contractor on the incoming downtown store.

Some of the 25-year-old, 979,489-square-foot building’s main tenants are Ally Financial Inc., Townhouse restaurant and law firm Clark Hill PLC. Plum Market will replace the Bistro, which was expected to fully move out in early November. Additional details on the change were not immediately available.

Plum Market will enter a restaurant-laden section of downtown without much in the way of grocery options. City Market two blocks east sells some fresh produce. Further east of downtown is Detroit’s first Gordon Food Service on Jefferson Avenue and an incoming small-format Meijer nearby.

The city could also see more Plum Market stores in coming years. Jonna said he sees opportunity elsewhere in Detroit to sell prepared food and groceries as more young people choose to live in the city.

“We could have several more Plum Market Kitchens and even a full Plum Market store in the city with the way it’s moving right now,” he said.

Matt Jonna declined to disclose revenue. He said the company has seen an average yearly sales growth rate of 15-20 percent.

It also expects to announce another Plum Market grocery store in metro Detroit before the end of the year and is “working on several more” between Detroit, Chicago and Indianapolis, Jonna said.

About the Author: admin