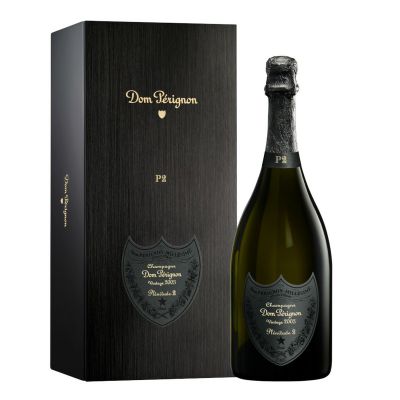 Winemaker’s Notes: Dom Pérignon is always a vintage wine and can only be produced from the grapes of a single year. For each vintage and from its inception, a limited number of bottles are set aside in the cellars, predestined for longer maturation. With this extra time, the inner activity in the bottle increases. The yeast transfers its energy to the wine a mysterious transfer of life.

After close to 15 years, the expansion of energy reaches its peak and Dom Pérignon rises to an apex of essential, radiant vitality in its state of Plénitude. Elevated to new heights, it unfurls across every dimension wider, deeper, longer, more intense and gifted further with a new, extended longevity. It is precise, intense, vibrant.

2003 is a year that will remain forever the year that changed the history of Champagne. A scorching summer imposed the earliest harvest since 1822, leading Dom Pérignon to interpret this unique year with an approach inspired by intuition and forward-looking choices.

Dom Pérignon Vintage 2003 Plénitude 2 offers a rereading of history and a second life of the Vintage 2003, revealing an insolent freshness. The enveloping flow is magnified, an unabashed embrace.

James Suckling - "This is a very thick, dense DP with layers of ripe fruit. Dried apple, pineapple and pie crust with some nougat undertones. Dense and layered with chewy tannins and a juicy finish. Umami undertone. This has the highest percentage of pinot noir ever. 15 years on the lees in bottle. 62% pinot noir and 38% chardonnay. Drink or hold."

Decanter - "The bouquet of 2003 P2 is striking for its diverse range of complex scents. Succulent and exuberant aromas of white fruit such as pear and peach but also of mirabelle plum have an underlying olfactive counterpoint reminiscent of a salty sea breeze, which imparts an oceanic as well as an earthy dimension enhanced by notes of flint, smoke, and verbena. On the palate, there is impressive density and a seemingly tannic sensation that provides structure to the fleshy mouthfeel, while sneaky acidity and bewitching bitterness provide a flourish to the long finish. Time has proven to be a valuable ally indeed for this massive yet harmonious Dom Pérignon, one of its kind. (Drink between 2021-2040) "

Vinous - "The 2003 Dom Pérignon P2 takes all the natural intensity of the first release and turns the dial up to eleven. Power, generosity and volume are all exalted. The P2 balances richness with a greater sense of creaminess that comes through extended time on the cork. Readers should expect a ample, heady Champagne that is very much built for the dinner table. I can't say I am especially surprised by how well the P2 shows, even in this freakishly hot, dry year, as the first release continues to be terrific."

Wine Spectator - "A supple backbone of citrusy acidity provides fine definition for this still fresh and lightly mouthwatering 2003, which is soft and creamy on the palate, offering heady aromas and flavors of marmalade, baked white peach, white truffle and coffee liqueur, underscored by minerally brine and smoke accents. This is finely detailed and well-meshed on the verbena- and spice-laced finish. Drink now through 2028."

Robert Parker's Wine Advocate - "The 2003 Dom Pérignon P2 is rich and demonstrative, wafting from the glass with aromas of stone fruits, honeycomb and buttered toast that leave more space for the wine's generous fruit tones than the more overtly yeasty original disgorgement. Full-bodied, broad and textural, it remains very youthful despite its below-average acidity, with notable precision to its ripe fruit tones and chalky structuring extract that provides, to some extent, a compensating sensation of freshness; it's actually evolving more slowly than its 2002 counterpart. Given the wine's richness, it works best with food. Chaperon relates that then-Chef de Caves Richard Geoffroy rejected any musts with a pH exceeding 3.3, the only time this metric has been used as a basis for selection for Dom Pérignon, and that the juice was allowed to oxidize before vinification. I'm looking forward to seeing the 2003 in its P3 incarnation, as I suspect that the wine will really come into its own when it develops more tertiary notes."