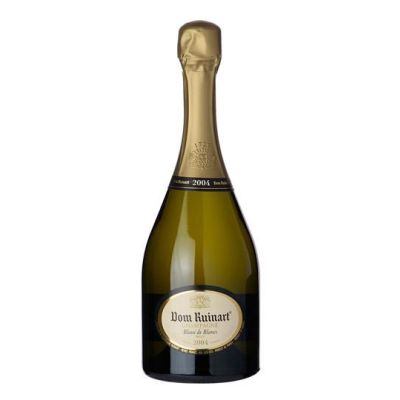 Winemaker Notes: Dom Ruinart 2004 is made entirely of Chardonnay Grands Crus: 69% from the Côte des Blancs (predominantly from Chouilly, Avize and Le Mesnil) and 31% from the northern slope of the Montagne de Reims (predominantly Sillery and Puisieulx). This is a perfect combination giving this vintage its ephemeral, delicate structure.

This vintage’s nose reveals the sweet, gentle notes of chestnut, coconut and fresh bread. This biscuity side to the wine very quickly gives way to aromas of flowers (iris, lily-of-the-valley and flowers of Seville orange trees) and citrus fruits (bergamot and citron). Just beneath the surface several mineral (wet rock and flint) and iodized saline notes make their appearance.

On the palate this vintage is initially direct but silky, sustained by mineral notes. The ephemeral nature of the Dom Ruinart 2004 is then revealed through citrus fruit freshness with touches of gentiana. The very long finish is characterised by grapefruit and kumquat zest notes with just the slightest hints of salinity.

The ephemeral, delicate structure of this vintage combined with outstanding freshness, typical of the Maison, offers the potential to complement very sophisticated dishes such as Peruvian style sea bream ceviche, or a lobster carpaccio with lemon caviar and coriander oil. The Dom Ruinart 2004 would further benefit from cellar ageing to be enjoyed following several years’ maturation. It will then complement dishes with more intense flavors.

Antonio Galloni - "The 2004 Dom Ruinart is just as brilliant and viscerally thrilling as it has always been. If anything, the 2004 has shut down considerably over the last six months. Tightly coiled and exceptionally beautiful, the 2004 boasts fabulous intensity, class and pedigree. The flavors are vibrant, chiseled and crystalline in their precision. Time in bottle is doing wonders for the 2004. This is a tremendous showing. Disgorged June 2013. "

Wine Spectator - "Showing an impressive backbone of acidity, this is dense and powerful, yet harmonious overall. The fine, creamy mousse swathes the statuesque frame in a silky texture, with honeysuckle, graphite and hazelnut notes lending fragrant accents to the rich palate of baked white peach, toasted brioche, lemon confit and smoke. Drink now through 2030."

Robert Parker's Wine Advocate - "Disgorged in February 2016 with 4.5 grams per liter dosage, the 2004 Dom Ruinart Blanc de Blancs offers up notes of of sweet citrus oil, toasted nuts, dried white flowers and smoke, followed by a medium to full-bodied, creamy and textural palate underpinned by lively acids and concluding with a saline finish. The 2004 is more classically proportioned than the 2006, but it doesn't possess quite as much depth or concentration."