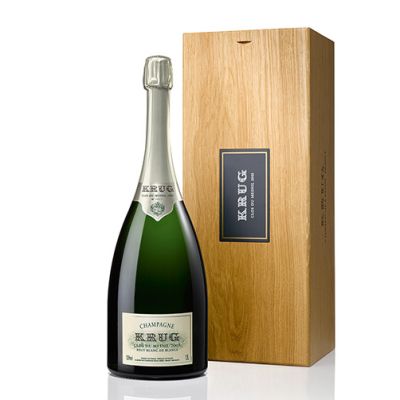 Winemaker Notes: The year 2006 was considered a hot one in Champagne, with extreme highs and 23 days recorded over 30°C. It was a capricious climate that went from dry periods to intense rainfall - in August, the equivalent of 2 months of rain fell in only 2 weeks.

Fortunately, the sun returned to complete the ripening period, shining on a beautiful harvest. The grapes showed balance similar to that of 2002 and 1989, which were also beautiful and generous years.

The 2006 harvest at Clos du Mesnil took place between 14 and 16 September, affording 14,973 bottles and 800 magnums (to be presented at a later date).
Krug’s Clos du Mesnil perpetuates the nonconformist spirit of Joseph Krug, founder of the House of Krug. It epitomises the House’s singular approach to Champagne making, which involves an in-depth knowledge of each plot and its individual wine, in order to create a Champagne of the undisputed quality envisioned by the founder.

Decanter - "The first aromatic impression is surprisingly floral in the context of such a hot vintage, and then evolves to reveal elements of menthol, liquorice and yellow fruit. With aeration, the bouquet blossoms to reveal increasing complexity, including spicy notes. On the palate, this is a fleshy and densely textured Clos du Mesnil with a salty tang on the finish, one that stands out for its singularity, albeit in the context of a classic crystalline, tense purity. Bravo – a work of art! "

James Suckling - "This is a fabulous edition of Clos du Mesnil. The pure Chardonnay is magnificent with density and agility at the same time. Apple and mineral notes with cream and biscuit character. Citrus and hints of mirabelle. Chalky, yet stony at the same time. Layered, yet linear and really long. But remains subtle. The acidity is so precise and focuses the flavors and nature. Lasts for minutes. Even better than the 2004"

Vinous - "The 2006 Clos du Mesnil was harvested over three days, which is remarkable for a tiny parcel measuring 1.84 hectares divided into five blocks that are often picked over a wider timeframe. Soaring in the glass, the 2006 is stratospheric in its beauty. The richness of the year contrasts so beautifully with the flintiness and energy of Mesnil. With time in the glass the mousse softens, releasing layers of vinous intensity. Tangerine oil, pastry, lemon confit and marzipan all build effortlessly. The 2006 is sumptuous, racy and exotic to the core, with all of that richness supported by a phenolic, intense frame."

Robert Parker's Wine Advocate - "Slated for release later this year, Krug's 2006 Blanc de Blancs Clos du Mesnil unwinds in the glass with aromas of buttered citrus fruit, crisp green pear, warm pastry, freshly baked bread, apricot and licorice. Full-bodied, layered and concentrated, the 2006's comparatively extroverted and gourmand bouquet is in contrast to its deep, chiseled and tightly wound palate, and it's here that the site really dominates the vintage signature. Long, sapid and penetrating, complemented by a pillowy pinpoint mousse, this is a brilliant Blanc de Blancs that has been well worth the wait. By the standards of young Clos du Mesnil, it's already quite approachable and can already be drunk with considerable satisfaction."

Wine Spectator - "A stunner, displaying all the lithe grace of a ballet dancer that belies the underlying powerful musculature. Sleek acidity creates a mouthwatering impression throughout, seamlessly knit with the fine, creamy texture. Expressive lime blossom and spice aromatics are layered with fruit flavors of poached apricot, dried cherry and a touch of passion fruit coulis. Long and minerally on the racy finish, echoing rich, savory notes of grilled nut and espresso. *Collectible*"