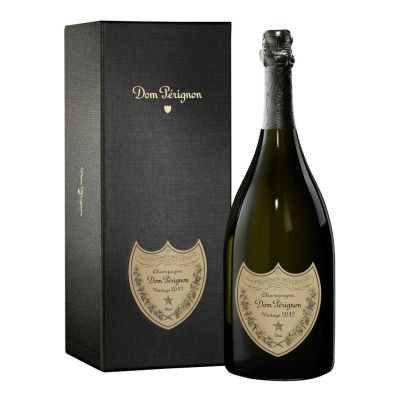 Winemaker Notes: Dom Pierre Pérignon was appointed "cellarer", or administrator, of the Abbaye d’Hautvillers in 1668. For the next 47 years he dedicated himself to creating "the best wine in the world. " Dom Pérignon’s creative ambition is a constant quest for harmony as a source of emotion.

The seasons
A year full of paradoxes for winemaking, 2012 gave birth to a great vintage, surmounting multiple challenges. Nature proved unpredictable and implacable as a series of climate events descended upon the vineyards: frost in the winter and spring, torrential rains, hailstorms, and cold spells while the vines were flowering, plus intense heat waves over the summer. A warm and dry climate alleviated any concerns as to the health of grapes, favoring the maturation of the fruit. The beginning of the harvest stretched from September 10 to 26, depending on the parcels. Tasting the grapes revealed tremendous promise, with a balance between freshness and generosity.

The nose
The nose is full and varied, mingling flowers with fruit, then vegetal with mineral. The bouquet is tactile, subtly enticing us along a trail of powdery white flowers and nectarous apricot, followed by the freshness of rhubarb and mint, and the minerality of ash. White pepper.

The palate
Energy dominates on the palate. After a welcoming open the wine quickly becomes vibrant and then literally explodes with a surge of effervescence and a tonic sensation. Focused by acidic and bitter notes, the finish brings a penetrating tautness, marked by ginger, tobacco and toastiness.

Decanter - "What a magnificent bouquet for this Dom Pérignon 2012! Pastry, a hint of smoke and autolytic notes provide a compelling counterpart to eager yet elegant aromas of citrus (lime, tangerine and kumquat) joined by those of fresh fruit, herbs, liquorice, and menthol. There is even a refreshing note of ivy. The palate is tense, vibrant, and very fresh despite its impressive density, which meets its match with an unending finish. This 2012 incarnates the very essence of Dom Pérignon with such a concentrated degree of intensity, along with a capacity for ageing, that it is surely destined for a second life in a P2 edition."

Vinous - "The 2012 Dom Pérignon is a dense, powerful wine. I am almost shocked by its vinous intensity and raw, unbridled power. The 2012 reminds me of the 2003, but with more finesse and not quite as pushed. Mildew, rain and frost were challenges and resulted in low yields, something that was further compounded by warm, dry weather that concentrated the fruit even more. Those qualities result in a dense Dom Pérignon endowed with real phenolic intensity. It is one of the most reticent young Doms I can remember tasting, I wouldn’t even think of opening a bottle for at least a few years."

James Suckling - "Wonderful elegance and balance to this Dom Pérignon with cooked apple, lemon and hints of white pepper and salt. It’s medium-bodied with really fine bubbles and balance. Spicy at the end. So wonderfully fresh, linear and long. Racy and elegant. A DP that invites to drink right now. All about finesse. Tension, too, with precise phenolics and bright acidity on the back palate. Subtle energy. Drinkable now, but will develop beautifully in the bottle."

Robert Parker's Wine Advocate - "The 2012 Dom Pérignon has turned out very well indeed, unwinding in the glass with notes of Anjou pear, smoke, toasted nuts, freshly baked bread and crisp stone fruit. Medium to full-bodied, deep and concentrated, it's still tightly wound, its incipiently fleshy core of fruit framed by racy acids and chalky grip, complemented by a classy pinpoint mousse. A touch drier and a touch less reductive than the 2008 out of the gates, these two vintages are clearly destined to be compared for some time to come; but at this early stage, my instinct is that the 2012 will have the edge in the long term. Rating: 96+"

Wine Spectator - "This eloquent Champagne has an enticing waft of Mandarin orange on the nose that continues on the palate, which is layered with flavors of crushed blackberry and cassis, toast, chopped almond, graphite and oyster shell. A bright, finely-knit and harmonious version, with a lovely, raw silk-like mousse, and a lasting, expressive finish."