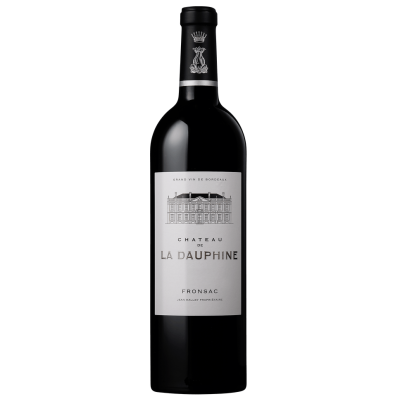 Availability: In stock
SKU
3511061576528
Be the first to review this product
was $45.00 Special Price $26.99
Save $18.01 (40%)
Details
As the single largest property in Fronsac, Château de La Dauphine is mounting a major come-back, evoking its ties to Charlemagne (who built a fortress in Fronsac), Cardinal de Richelieu (who acquired the land and made its wine famous among the nobles), and its namesake title resulting from the visit of Louis XVI's mother, Mary Josepha of Saxany, who was known as La Dauphine (the French word for "The Princess"). She never became the French queen as her husband died from illness before being crowned. Her son married Marie Antoinette and ascended the throne as the last French king before the French Revolution. La Dauphine, Mary Josepha of Saxany, was hence the mother-in-law of the more famous Marie Antoinette, an ill-fated Austrian princess who was swept up in the tidal waves of the revolution.

Robert Parker's Wine Advocate - "The 2015 La Dauphine is a blend of 90% Merlot and 10% Cabernet Franc. Having vexed about the 2014 last year, the 2015 is a much "happier" sample, pure and quite elegant with black cherries, blueberry and cassis fruit, the new oak nicely integrated. The palate is medium-bodied with supple tannin, crisp blackberry and bilberry fruit with a healthy sprinkle of white pepper to spice up the finish. This is an excellent Fronsac, although it deserves 4-6 years in bottle."
- Neal Martin, Robert Parker's Wine Advocate (4/27/2016, Issue 224), Ratings: 91-93, Drink: 2021-2045

Wine Enthusiast - "The 2015 La Dauphine is an attractive, mid-weight Fronsac to drink upon release. Super-ripe, black cherry, plum, lavender and violet are laced into the inviting, floral finish. This is an especially polished, refined Fronsac from the Halley family. In some tastings, the fruit was quite ripe and succulent, while at other times, the wine was a bit more understated. Either way, the 2015 should be a terrific value. Tasted four times."