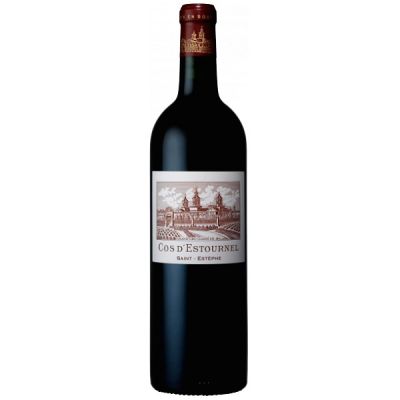 Winemaker Notes: Produced from a blend of 76% Cabernet Sauvignon, 23% Merlot and 1% Cabernet Franc the 2016 vintage from Chateau Cos d'Estournel benefit from exceptionally atypical conditions. Situated north of the Medoc, in the Saint-Estephe appellation, the older vines enjoy a terroir with a lot of clay which is ideal for producing rare wines. The deep roots allow the vines to combat the extreme weather, such as droughts in the Gironde department. The wine was aged in barrels, 60% were new.

Cos d'Estournel is slow to reveal itself. Little by little, it evokes stories of distant places, market stalls brimming with unfamiliar fruits, spices and wares, village festivities warmed by the joy of revelers and the setting sun, and sumptuous visions of ladies and their voluptuous curves. A myriad of scents, colors and tastes appeals to the senses. The Grand Vin of Cos d'Estournel is both demure and deliberately sensuous, a fascinating and elegant nectar.

James Suckling - “This is muscular yet so well defined and toned. Full-bodied with deep and dense fruit on the palate, yet powerful and rich at the same time. So much sandalwood and blackberry character. Chewy and rich at the finish. This is a warm and generous wine, but the alcohol is just over 13 degrees. Not that high. Love the finish. Extravagant. Magical. Try from 2025.”

Antonio Galloni - “The 2016 Cos d’Estournel was a bona fide showstopper out of barrel, the best that I had encountered in over 20 years of visiting the estate during en primeur, so my expectations were piled high when I returned to find out how it performs in bottle. Deep, almost opaque in color, it sports a very intense but broody bouquet with fathomless deep black fruit tinged with blueberry and violet. The aromas almost seem to envelop the senses. The palate is medium-bodied with ultra-fine tannin that I have never witnessed in any other vintage of Cos d’Estournel. There is a beguiling symmetry to this Saint-Estèphe, as well as unerring mineralité. The persistent, tobacco-tinged finish can be felt 60 second after the wine has departed. This is a monumental, benchmark Cos d’Estournel that will give not years but decades of pleasure, though I suspect it will close down for a period in its youth, hence my drinking window. 13.07% alcohol.”

Robert Parker - “The 2016 Cos d'Estournel is blended of 76% Cabernet Sauvignon, 23% Merlot and 1% Cabernet Franc aged in 65% new and 35% two-year-old French oak for 15 months. Bottled in July 2018, it is deep garnet-purple colored and starts off a little closed and reticent, opening out slowly and seductively to reveal beautiful lilacs, rose hip tea, crushed stones and camphor nuances over a core of crème de cassis, kirsch, wild blueberries and mocha plus wafts of incense and wood smoke. The palate is simply electric, charged with an energy and depth of flavors that seem to defy the elegance and ethereal nature of its medium-bodied weight, featuring super ripe, densely pixelated tannins that firmly frame the myriad of fruit and floral sparks, finishing with epic length. Just. Magic.”

Jeb Dunnuck - “The grand vin 2016 Cos d'Estournel checks in as 76% Cabernet Sauvignon, 23% Merlot, and 1% Cabernet Franc that saw 70% new French oak. One of the more seamless, pure, elegant versions of this cuvée out there, it boasts a saturated purple color as well as a monster nose of pure crème de cassis, gravelly, rocky minerality, tobacco leaf, crushed violets, and lead pencil shavings. One of those “iron fists in a velvet glove” wines, with full-bodied richness and beautiful structure that’s covered by thrilling levels of fruit and texture, it stays tight, compact, and incredibly focused on the palate. It’s already brilliant given its purity of fruit and balance, but it deserves a decade of bottle age and will keep for 4-5 decades.”

Decanter - “This is a little tight right now, as are so many of the 2016s. The fruit is deep, dark and concentrated, with fierce tannins that will take a long time to come around but will age well. There's no question that this is a monumental Cos, with the walls of slate ready to be scaled, joined by a rosemary and black olive tang, juicy liquorice root and lashings of cassis. I tasted this wine both en primeur and again during a vertical at the property in July, and have felt thrilled to recommend it each time. Aymeric de Gironde was still the director at the time, before leaving in 2017.”

Wine Enthusiast - “Powerful tannins show strongly in this elegant, structured wine. Rich black-currant and black-plum flavors are lifted by acidity. The wine has weight and concentration, but also is poised and fresh. This combination will allow the wine to age for many years. Drink from 2025.”

Wine Spectator- “This has a core of slightly exotic loganberry, plum and boysenberry fruit laced with singed spice, savory, lilac and incense notes, while a buried chalk-edged minerality sits in reserve. Very sleek, with a wonderfully long finish that lets the fruit and other elements shimmer. Best from 2025 through 2040.”