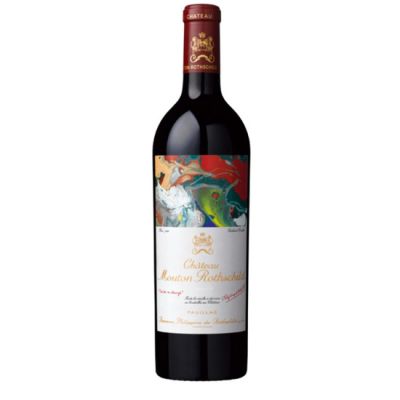 Availability: In stock
SKU
50009
Be the first to review this product
was $999.00 Special Price $899.97
Save $99.03 (10%)
Details
Winemaker Notes: The wine is a dark and intense cherry red. The highly refined nose reveals perfectly ripe fruit. Ripe bilberry and blackcurrant aromas combine harmoniously with floral notes. With airing, the nose unfolds on pepper and spice balanced by elegant notes of graphite and blonde tobacco, bringing charm and nobility to an extensive range of aromas. The full and dense attack exhibits exceptionally well-rounded and silky tannins. The ample mid-palate abounds in black fruit along with cocoa flavors and biscuity notes, leading into a full-bodied and remarkably persistent finish, the sign of a great vintage. Varietal mix: Cabernet Sauvignon 83%, Merlot 15%, Cabernet Franc 1%, Petit Verdot 1%

In 2016, there were two main trends in the weather as we experienced it in Pauillac: a very wet winter and spring: more than half of the annual rainfall came in the first four months of the year, including a record 240 mm in January; an extremely dry summer and autumn without any significant rainfall, resulting in a water deficit at the end of the year. As a consequence of the summer drought, the grapes were numerous but remained rather small, making for density and concentration.

High temperatures in August and September allowed for slow ripening and excellent maturity, so that the harvest started with the Merlot on 26 September and continued in perfect conditions until 14 October. In the vat house, each grape variety and each plot were, as usual, vinified separately in order to let their intrinsic character shine through. The wines, which have now been blended, offer remarkable color, intense fruit and spice aromas and a dense texture of very rich and well-rounded tannins. Its density and substance make the 2016 vintage comparable with the finest so far this century.

Jeb Dunnuck - “Along with the Château Lafite, the 2016 Château Mouton Rothschild is the wine of the vintage from the Médoc and is a truly profound, magical, blockbuster wine in every sense. It’s based on 83% Cabernet Sauvignon, 15% Merlot, and the rest Cabernet Franc and Petit Verdot, raised in new French oak. Boasting a saturated purple color as well as an extraordinary bouquet of thick black fruits, lead pencil shavings, new saddle leather, and burning embers, with just a hint of its oak upbringing, this beauty hits the palate with a mammoth amount of fruit and texture yet stays fresh, pure, and light on its feet, with a thrilling sense of minerality as well as building tannins on the finish. It’s one of the most profound young wines I’ve ever tasted, and while it will probably keep for three-quarters of a decade, it offers pleasure even today. Bravo!”

James Suckling - “Dark ruby, purple color. Aromas of blackcurrants, black truffle, crushed stone, licorice and hints of tar. Full-bodied, deep and vertical on the palate, drawing you in and down. The structure is very tannic and powerful, yet the tannins are folded into the wine. One of the most powerful Moutons ever for me. Try after 2027.”

Robert Parker - “The 2016 Mouton Rothschild is a blend of 83% Cabernet Sauvignon, 15% Merlot, 1% Cabernet Franc and 1% Petit Verdot, with the Cabernet Franc and Petit Verdot vinified together. It has a very deep purple-black color and slowly slides out of the glass with spicy notes of Sichuan pepper, cloves and cinnamon stick giving way to a core of perfumed black fruits and florals—blackcurrant cordial, candied violets, blackberry compote, rose hips and black plums—plus suggestions of espresso, damp soil, tar and beef drippings. Medium-bodied, the palate is very firmly structured and jam-packed with latent energy about to burst, offering superbly ripe, grainy tannins and bold freshness to support the intense floral and black fruit layers and finishing very long and very minerally. Powerful, profound wine.”

Antonio Galloni - “A towering, thrilling wine, the 2016 Mouton Rothschild is unbelievably beautiful today. Aromatics, fruit density and vertical structure all come together. In the glass, the 2016 is remarkably vivid and powerful, and yet a gentler, more feminine side emerges with time in the glass. The intense, mineral, savory profile recalls the 1986, but the 2016 has more grace, inner sweetness and sophistication than that wine. Even so, the 2016 is going to need at least a number of years in bottle before it starts drinking well, although it won't be the bruiser the 1986 remains to this day. This is breathtaking wine from Mouton, Tecnical Director Philippe Dhalluin and his team.”

Decanter – 99pts - “A higher level of acidity than is usual for Mouton is buttressed by waves of fruit and tannin. It's a modern take on 1986 that shows the most wonderful precision of creme caramel, liquorice, blackcurrant, creme de cassis and cedar. It's opulent but also has great tension through the palate - a monumental Mouton that for me has gained in stature over the past two years of ageing. The idea of a drinking window almost feels like a mirage - the perfect moment is likely to recede into the distance time and time again. It could be drunk in the next decade perhaps, but it's going to take 20 years or more to really get into its stride. Easily one of the wines of the vintage, for me this is showing even better than during en primeur. 1% Cabernet Franc completes the blend. Drinking Window 2028 - 2045.”

Wine Enthusiast - “The rich fruit in this wine nearly envelops the tannins. Flavors of black plums, blackberries and blueberries meld with intense acidity to mask the power and concentration of the polished tannins. With this structure, will age for many, many years. Do not drink before 2026.”

Wine Spectator - “A generous, pure and lush ball of Cabernet, with wave after wave of unadulterated cassis and blackberry puree flavors rolling through. Features notes of roasted apple wood and sweet tobacco, offset by a long tug of sweet earth, but that’s all background music to the impressive core of fruit, which steams along like a cruise ship with enough stores in reserve to go around the world twice without stopping.”
More Information
Reviews
Write Your Own Review
AGE VERIFICATION