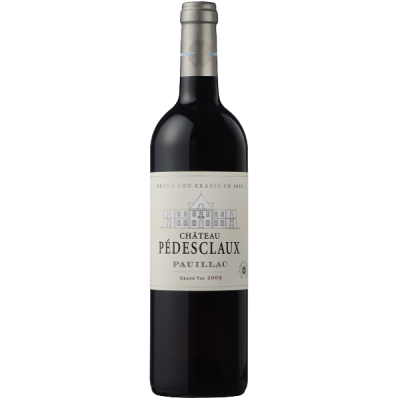 The 45.2 hectare vineyard has vines that are, on average, 35 years old. The vines are planted on gravel from the Garonne and limestone. Chateau Pedesclaux 2016 is a blend of 48% Cabernet Sauvignon, 45% Merlot, 4% Petit Verdot and 3% Cabernet Franc. Chateau Pedesclaux 2016 is sweet and ample in the mouth, displaying its soft and voluptuous characteristics. Hints of spices, licorice and roasted hazelnutscan also be tasted. The finish is lively and offers fruity notes (forest fruits) and floral notes.

James Suckling - “So aromatic with crushed currants, raspberries and blackberries with hints of graphite and lead pencil. Full-bodied and very tight with beautiful tannins and a long, flavorful finish. The tannins really build at the end of the palate. Try from 2024.”

Decanter - “This really shows the heart of 2016 in the northern Médoc - it has the triumvirate of good acidity, good tannins and good fruit. It's a little austere and is going to take its time to truly get going. A second bottle proved much better for depth, as we queried rusticity on the nose of the first bottle. The second instead showed a hawthorn, hedgerow character and gorgeously rich black fruits, concentrated and focussed, and given complexity by tobacco and spice. It's the first time that four grape varieties have been used in the grand vin - Cabernet, Merlot, Petit Verdot, plus 3% Cabernet Franc. Eric Boissenot consults.”

Jeb Dunnuck - “An estate that’s unquestionably on the upswing, the 2016 Château Pédesclaux is made from 48% Cabernet Sauvignon, 45% Merlot, 4% Petit Verdot, and 3% Cabernet Franc that spent 18 months in 60% new oak. In the past, the wines from this estate have been slightly chunky, but that started to change around 2014, and I think this 2016 is the best yet. Beautiful blue fruits, violets, spicy oak, and a touch of minerality all emerge from this medium-bodied Pauillac, which has fine, polished tannins, a seamless texture, and a great finish. With purity and finesse as well as richness and depth, it’s already reasonably approachable today, but it’s going to evolve for three decades or more.”

Robert Parker - “The 2016 Pedesclaux is composed of 48% Cabernet Sauvignon, 45% Merlot, 4% Petit Verdot and 3% Cabernet Franc. It aged for 18 months in 60% new and 40% one-year-old French oak. It has a deep garnet-purple color and nose of crushed red and black currants and blackberries with cigar box, new leather, pencil lead and crushed rocks. The palate is medium-bodied, elegant, fresh and lively with loads of mineral nuances and a lovely earthy finish. Around 15,000 cases produced.”

Wine Spectator- “An extroverted style, with bold plum and blackberry compote aromas and flavors, infused with anise accents and backed by an alluring finish of toasted vanilla, violet and mocha. On the showy side, but has enough latent drive to keep it honest. Drink now through 2030.”