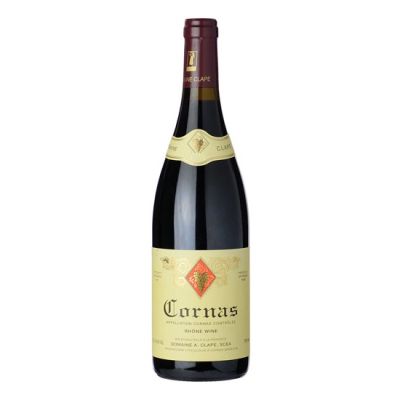 Availability: In stock
SKU
761503638656-1
was $190.00 Special Price $184.99
Save $5.01 (3%)
Details
Winemaker Notes: Monsieur Clape's Cornas is systematically considered the best in the appellation, constantly attaining the most amazing levels of excellence. There is always an extremely deep purple, almost black color that exudes a never-ending array of rich complex aromas of dried fruits, licorice, spice and pepper. The sheer power and concentration of the wine on the palate is overwhelming. The attack is sensational, followed with an incredible volume of extract that saturates the palate in rich, concentrated fruity tannins that last through a magnificently long, stunning finish. These wines need at least 5 or 6 years in bottle before they will open up, but are at their best after 10 years.

Decanter - "A tasting of the various lieu-dits suggest a fairly classic vintage, on the riper side but not as ripe as 2015, with well-balanced acidity and ripe tannins that are relatively approachable for this domain. Some tanks showed a little raised volatile acidity, which may show up in the final blend. They will make Renaissance this year; tanks yet to be selected at this stage, so the score is very much just an early indication. Some rain in May had Pierre Clape worried about mildew, but a few treatments with copper did the trick - there was a little on his whites but not his reds. A relaxed harvest started on the 12th of September, fermentations were long with no destemming as usual, fermented in concrete, aged in large old oak barrels."

Jeb Dunnuck - "The flagship comes largely from the Reynard lieu-dit (unquestionably one of the finest vineyards in the appellation) and the oldest vines of the estate. The lots destined for this cuvée offered another level of richness and depth, with more opulence and decadence than most recent vintages. Full-bodied, concentrated, and tannic on the palate, it’s going to require patience. The 2015 was even more tannic and backward at this stage, but there’s more than a touch of greatness in this beauty. Pierre-Marie Clape and his son Olivier continue to make some of the most impressive (as well as singular) wines in the world from their tiny cellar in Cornas. This is a bastion of traditional winemaking and the wines are not destemmed, see long fermentations, and aging in ancient barrels and casks. While they didn’t release a Renaissance cuvée in 2017 due to tiny yields, their Cornas is stunning stuff not far off what was achieved in 2010 and 2015. I suspect the 2018 will match, or exceed, the 2017. 94-96pts"