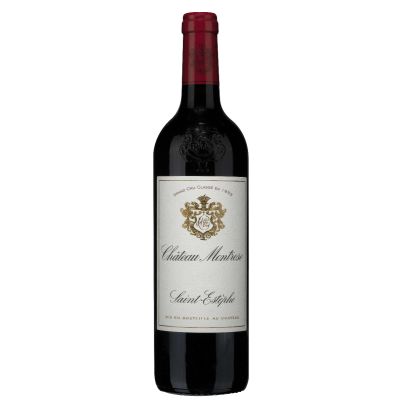 Availability: In stock
SKU
85969
was $300.00 Special Price $259.99
Save $40.01 (13%)
Details
Winemaker Notes: 2018 marks an important step in the conversion of our vineyard to organic viticulture. The weather conditions resulted in strong pressure from parasites, requiring extreme vigilance. Vineyard management was complex, therefore, but the direction of our environmental approach was firmly maintained. The fine weather and heat at the end of summer, comparable to 2009, made the vintage, which expressed incredible potential in the cellar. The first tastings show the signs of a very great vintage, a subtle combination of the fruity aromatic profile of the 2009 and the precision of the 2016.

Jeb Dunnuck - "A full-bodied powerhouse as well as a perfect wine, the 2018 Château Montrose is a final blend of 72% Cabernet Sauvignon, 20% Merlot, and 6% Cabernet Franc that was raised in 60% new French oak. Boasting a deep purple hue as well as awesome levels of crème de cassis and smoky blackberry fruits and notes of tobacco, lead pencil, scorched earth, and chocolate, it's deep, opulent, and incredibly concentrated on the palate, with no shortage of mid-palate depth, tannin's, or length. It reminds me a little of a fresher version of the 2003, although there's more Cabernet Sauvignon in 2018 as well as less Merlot. It has that classic Montrose minerality and backward, mineral-laced style, yet I suspect this will be drinkable in just 5-6 years and should evolve into a modern-day legend from this terroir."

James Suckling - "Purity and beauty on the nose with blackberry, blueberry, raspberry, crushed-stone and violet character. A full-bodied red with masses of polished tannins and intense flavors of currants and blackberries. Juicy finish. Super depth to this. Goes on for minutes. Try after 2027."

Wine Enthusiast - "This superb wine offers intense, spicy tannins and rich black fruits that yield an impressive, ageworthy bottling. Its black plum flavor and juicy acidity are enhanced by the firm tannins, with a touch of nutmeg on the finish."

Decanter - "Rich and deep with beautifully nuanced dark chocolate, mocha, cocoa bean and liquorice. Just full of understated power and silky tannins. This is gorgeous and among my top wines of the Left Bank. As it opens in the glass you get sweet black cherry and cassis flesh, and a sense of lilting sappiness. Great stuff from Montrose. Drinking Window 2028 - 2045"

Robert Parker's Wine Advocate - "Composed of 72% Cabernet Sauvignon, 20% Merlot, 6% Cabernet Franc and 2% Petit Verdot, harvested from September 17 to October 5, the 2018 Montrose has a very deep purple-black color and opens with tantalizing notes of crème de cassis, Black Forest cake, hoisin and mocha with nuances of molten licorice, fertile loam, cast iron pan and incense. Big, rich, full and powerful in the mouth, the voluptuous fruit has a rock-solid backbone of very firm, very ripe tannins to match with tons of freshness and an epically long, exotic spice finish. A magnificent monster of a Montrose!"

Vinous - "The 2018 Montrose delivers on the promise that it showed from barrel. I gave this a three-hour decant before broaching, since Montrose is always backward, albeit far less ferociously than even just a decade ago. It offers copious blackberry and blueberry scents on the nose, plus pressed violets and a light estuarine scent that becomes accentuated with time. The palate is medium-bodied with a silky-smooth texture. Finely chiseled tannin's frame multilayered black fruit infused with crushed stone, and it has retained that subtle graphite element that lends it a Pauillac-like personality, though less so than out of barrel. This is a beautifully defined Montrose with entrancing symmetry, and it should drink earlier than other recent vintages thanks to a little more pliancy. Drinking window: 2025 - 2060"

Wine Spectator - "Dark and winey, with a well-built core laden with cassis and dark plum puree while flashes of anise, lilac and charcoal fill in throughout. Finish has hints of chestnut and warm earth for a burly edge, but there's ample fruit for balance. Plenty grippy in the end too; cellaring required. Cabernet Sauvignon, Merlot, Cabernet Franc and Petit Verdot. Best from 2023 through 2036."