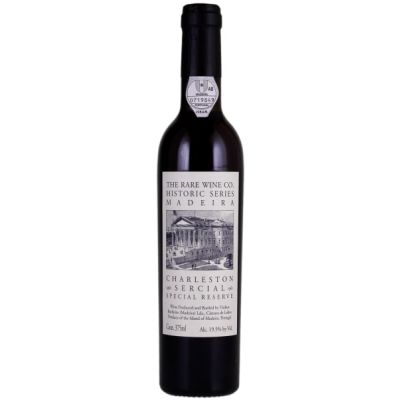 Winemaker Notes:  This is the driest wine in the series and a wine that has been served throughout meals in America for nearly 300 years. Chef Mario Batali won over 1000+ guests at the 2009 New York Wine Experience by boldly pairing Charleston Sercial with a wild boar dish of Wolfgang Puck’s creation.

Wine Enthusiast - "The Historic Series are simply great Madeiras at reasonable prices. The Charleston Sercial is the driest of the collection, offering nutty aromas tinged with honey, caramel and maple syrup. Dried figs, honey and candied citrus flavors mark the palate, which is wonderfully smooth. The long finish features racy yet balanced acidity. "

Robert Parker's Wine Advocate - "The NV Charleston Sercial (Rare Wine Company) is also showing nicely, delivering scents of orange oil, dried white flowers, beeswax, walnuts and nutmeg. Medium to full-bodied, satiny and enveloping, it's bright and precise, with tangy acids cloaked in a fleshy core of fruit, concluding with a long, off-dry finish. This is the driest wine in the Rare Wine Company's historic series and the bottling that would best lend itself to pairing with savory dishes."