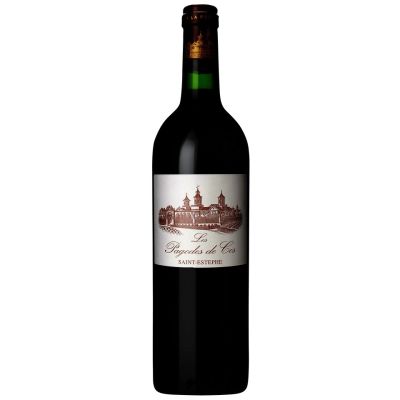 Winemaker Notes: This Saint-Estephe Second vin du Chateau Cos d’Estournel is a charming wine with its own character, which well-expresses the Cos d'Estournel terroir, both on finesse and subtlety.

Robert Parker's Wine Advocate - "The brilliant 2009 Les Pagodes de Cos actually has more Cabernet Sauvignon in the blend than the grand vin (69% versus 65%) in addition to mostly Merlot and a small quantity of Petit Verdot. As powerful as the Cos in terms of alcoholic clout (14.5%), the full-bodied, round, generous Les Pagodes de Cos exhibits lots of creme de cassis and floral notes intermixed with hints of wood/barrique and spice. Juicy, succulent and remarkably fresh and well-delineated, it merits considerable attention from consumers. It should drink well for 15-20 years. Oddly enough, the second wine is superior to many vintages of Cos in the 1960s 1970s and 1980s!"

Jeb Dunnuck - "The 2009 Pagodes De Cos is a blockbuster that I wish I had more of in the cellar. A blend of 69% Cabernet Sauvignon and the rest mostly Merlot (there’s a small amount of Petit Verdot) brought up in roughly 50% new French oak, its deep purple/plum color is followed by a smorgasbord of black raspberry and kirsch like fruits, spice box, dried flowers and licorice. With a huge mid-palate, sweet, sweet tannin, beautiful purity of fruit, and a great finish, it’s an incredibly sexy, satisfying second wine that will keep for another 10-15 years."

James Suckling - "Spices, nutmeg, dark fruits on the nose, follow through to a full body, with very precise tannins and a long finish. A beautiful and racy wine. Second wine of Cos d'Estournel. Better in 2017."

Wine Spectator - "Remarkably lush and supple for the appellation, yet not lacking in density, with rich plum, cassis and blackberry confiture notes leading the way and flickers of charcoal, tobacco and singed iron keeping the almost-flattering finish honest. Approachable, but this should knit nicely with mid-term cellaring. Drink now through 2023."